Rankpoll is an easy way to create ranked polls for you and your community. There are many problems with traditional first-past-the-post voting. Rankpoll uses a system that solves all of them, by allowing voters to rank their favorite options instead of just choosing one favorite.

See how it works by looking at an example.

To make the system more transparent, you can see how votes were counted to arrive at the final result. However, if you don't care about the details you can simply create your poll, share it with your voters and rest assured that the result is fair and accurate.

Why should I care about voting systems?

Everybody experiences voting in their life in some form or another: elections, internet polls, team decisions at work, trying to decide what to eat in a group of friends. If you ever participate in a voting system, you probably also care that your one voice is heard. Understanding the voting system being used is the only way to know that you and everyone else is being fairly represented.

Not caring about the voting system being used is like playing a board game where your host just made up the rules, but everyone for some reason agrees that the game is probably fair, since the rules were so easy to make up. Just because something is simple and the first thing you think of, doesn't mean it's fair and good at what you intended it for.

Most people intuitively use a system called first-past-the-post voting, where each person gets to vote for 1 option and the option with most votes wins. This is also called plurality voting. This system has multiple problems:

All of these problems are solved using a system called Single Transferable Vote (STV). It works by letting voters rank their favorite candidates. After counting the first choices, if no one has more than half of the votes, you can eliminate the least popular candidate, and try again. Eventually, someone will have the majority of voters and can be declared the winner. 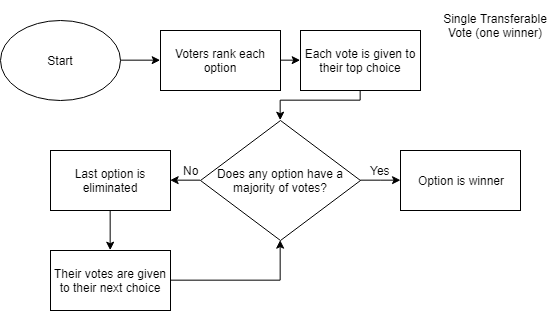 When multiple options are allowed to win, a trick can be deployed to make sure each winning option has met some minimum amount of votes, instead of being handed the win for having the most remaining votes, like in some archaic system. If 1000 people vote and 4 options need to be selected, instead of requiring 250 votes, we can require only 201 votes. Since, if 5 options were to reach that quota, you'd need at least 1005 votes. This is called the "Droop Quota", and can be calculated like so:

When multiple options are allowed to win, sometimes the first option to reach the quota will have more votes than the quota. If nothing is done with these votes, it actually punishes voters for backing popular options, as their votes are wasted, similar to how voters backing unpopular options in plurality voting waste their votes.

What we want to do is distribute them in some way to their next choice, to reward backers of popular options and allow them to get more representation in the final result. When doing an STV election with physical papers, multiple approaches can be used usually involving sampling a random subset of ballots and redistributing those.

When doing the election digitally, however, we can easily use the most fair system called Gregory Surplus Allocation. This allows all backers of a popular option to be represented but at a reduced value. If an option has 100 backers and only needs 90, it has 10 surplus votes. All 100 votes are given to their next choice but now they're only worth 0.1 votes. For all practical purposes, it's still 10 votes that have been distributed.

Approval voting is very straight forward: each voter can vote on as many options as they'd like, and the option that has been chosen the most times wins.